I’m here with a short update now that I have reached and moved past the six month remaining point in my lease.

2011 finished with a whimper, financially, due in large part to an extraordinary amount of time off. I was up to almost five weeks time off (in addition to every second or third weekend) by mid summer and I took another nine days off around my birthday and I just returned from yet another eight days off for Christmas and New Years. The 52 weeks ending just before Christmas when I departed for the year shows 109,936 paid miles in calendar 2011. Five more weeks of work would have resulted in approximately 12,000 more miles which is where I normally run at.

The truck has been running well since my last update, with the usual hiccups you get with any vehicle operated for the miles (and along the roadways) we travel. I again got lucky with a large repair still covered under warranty as my turbo went out at about 460k miles and the warranty good through 500k! If you look at the financials you’ll see a large whack to my maintenance account on December 2 but almost all of that will be repaid in a few months once the warranty paperwork gets ground through the system. I lost another windshield or two along the way, as well as a few trailer tires, various lights and the other smaller things that go wrong here and there. Still, I can’t complain about the downtime or expense — both have been in the expected range and my maintenance account has yet to go dry.

I remain surprised over the durability of this blog, to be honest! The last time I looked at the figures they showed 500 or so unique readers per month, this more than a year after I stopped updating all but the financial section regularly. This post is the 1,085th according to the stats for WordPress, so apparently the power of internet search remains strong.

My cat Snow White remains resolute that she is, in fact, the prettiest pet over the road. She has over a quarter million miles on her now and you’d hardly notice the wear and tear! 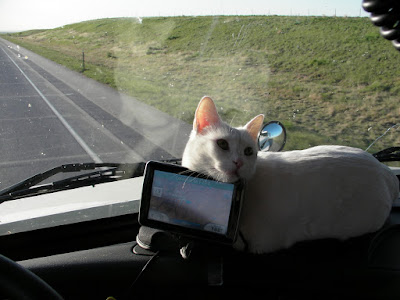 Hill Brothers has recently moved away from Volvos, investing instead in some Kenworth T660’s and International ProStars. I don’t care for either of these vehicles and wouldn’t consider leasing them. More recently, management decided to buy another thirty Volvo 780s, but I don’t care for the way they are specced. I’ve already decided that I won’t be making the balloon payment on this truck so by early June this adventure will be finished, one way or the other.